Last week I saw the product of months of planning and worry came to fruition as CodeCraftConf brought local developers together. They were not there to hear advice from an expert, but to share peer to peer their own opinions, thoughts and experiences. We call the format that supports this style a guided conversation

I can’t put in the words how it feels to have your conference to finish. But I’ll try. It’s like the same feeling you have the day after your wedding. All that preparation and now you are having a cup of tea without any nagging thoughts in your head. It’s post event elation coupled with a sense of loss. Did that really happen? What am I supposed to do now?

I’ve decided to think over what worked well and what I would change for any future conference based on the same format.

During the first minutes of the conversations I’m feeling terror. We’d invited a collection of local development talent, given them a coffee, then left them to talk over a subject at 9:15am on a Friday. What if no one speaks! What if they all walk out after one session thinking it’s not for them!

To my utter relief, it worked fine.

Our first two guides both engaged the group and had a jovial manner which put myself at ease, and worked with getting the participants to start sharing.

Does the guided conversation style scale? 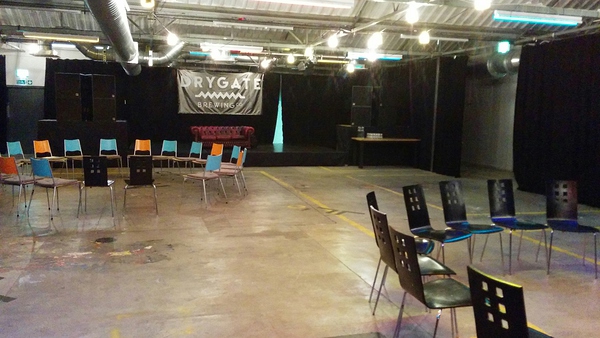 Yes. By limiting the number of people in each session.

We limited each session to 21 participants by limiting the chairs and saying you must have a chair to be part of the conversation. Using this rule you could run parallel sessions on different topics. You’d probably want to run the same theme a few times if it was a popular topic like TDD or MicroServices.

I personally met every guide we had run sessions before the conference. The reason for doing this was to make sure they understood the goal of the format. The guide doesn’t have to be an expert, just an enthusiastic person with the ability to facilitate a group discussion. For this conference the guides happened to all be experts as we found them via a CFP. Next time around I’m happy to be more relaxed on the guides expertise.

Are there any other benefits to guided conversations as an organiser?

Sadly, we were notified that one of our guides couldn’t make the conference due to an illness. Rather than cancelling their session I asked them to send over their question set. With this we were able to run the session in their absence.

Usually a late cancellation would mean an empty slot, or some impressive organiser gymnastics. With a guided conversation all you need is an alternative facilitator and the same question set.

How did you cater for diversity?

This is an area where we can do much better next time. 11% of our attendees were female and none of our guides were. The organising team were aligned on improving this situation but we have a lot to learn on being effective.

We tried directly emailing folk to ask them to guide sessions or attend the conference, but we weren’t lucky with using our own contacts. I now believe that ensuring a diverse attendance is a full time role on the organising committee. Next time I want to invite someone local to join us who represents a background unlike mine.

We asked attendees to write down notes on an index card and put it in an envelope.

Peter Aitken gave me some advice before the conference which is to not read this feedback until at least a week afterwards. His reasoning is that you will dwell on the negative feedback, which can ruin that post-conference tranquility. I’ll be opening the feedback with the other organisers tomorrow.

Did you have any issues on the day?

I spent most of the day worrying about the noise level. We had both of the main conversation groups within meters of each other without any barrier in between them. To mitigate the noise we tried compressing the circles and moving them futher apart. Next time around I’d choose a venue with separate rooms or invest in a sound proofing system.

Another issue we had was integrating other formats into the conference. As well as the guided conversations we had a workshop track, which wasn’t mentioned when we first launched the conference. Since all our attendees were keen to try out a guided conversation, the first workshop had no participants. This scheduling conflict seemed to irk some of the attendees as well.

Next time I think we’ll gradually introduce alternative formats in the afternoon, rather than straight away. The Lean Coffee we ran before lunch was well attended, I’d probably give that two hours next time rather than one.

So would you do it again? 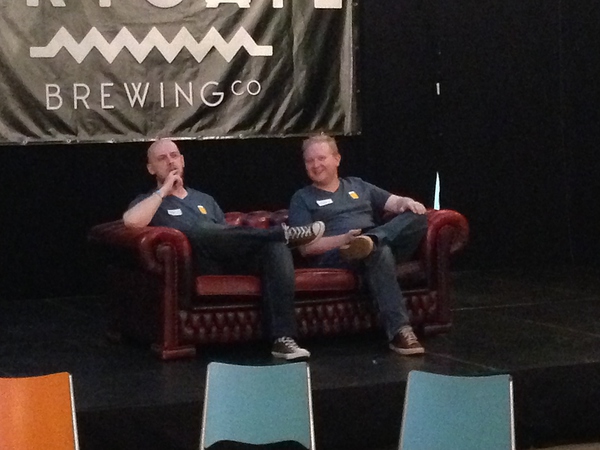 The picture above came minutes before the end of the conference. We had ran our first ever conference, using a brand new format. And it worked. Well I thought so, Gary looks unsure.

I like the challenge of improving the conference format, and figuring out how to run a diverse conference where I live.

I’ll see you all next year. If you’re willing to share your thoughts.